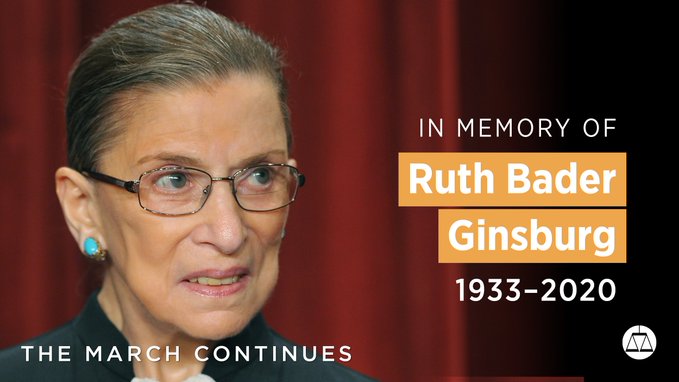 RGB's Personal Connection to Each of Us

Our emotions hit across the generations -- both young and old, women and men --grief stricken and angered by the vagaries of these times. How did an 87-year-old woman connect so widely?

Perhaps we saw her as identifying with our own lives. She stood up for US.

As written in a tribute in a Huffington Post article:

“[She] had the audacity to challenge a legal system that formally regarded women as second-class citizens . . . one of the few moral anchors in a world that increasingly feels set out in an unimaginably rocky sea.”

RBG always was that approachable and soft spoken anchor -- not intimidated or angered by judicial disagreements, but rather a finder of common ground and an optimist.

RBG voiced her philosophy as:

“Reacting in anger or annoyance will not advance one’s ability to persuade. . . Fight for the things that you care about, but do it in a way that will lead others to join you.”

Justice Ginsburg Talks about the Future of the U.S. Supreme Court

U.S. Supreme Court Justice Ruth Bader Ginsburg visits the University of Chicago Harris School of Public Policy on September 9, 2019, for a conversation hosted by Harris Public Policy Dean Katherine Baicker, who awarded Justice Ginsburg the 2019 Harris Dean’s Award. The award is given annually to an exceptional leader who has championed analytically rigorous, evidence-based approaches to policy, and who is an example for the next generation of policy leaders and scholars.