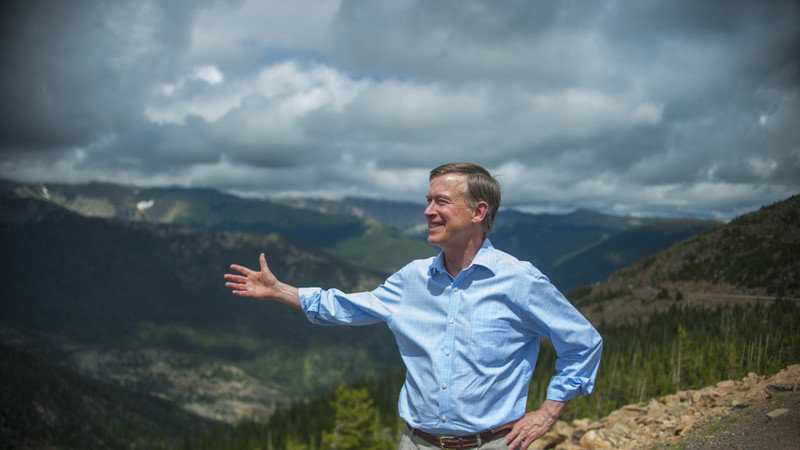 Governor John Hickenlooper is proud to say exactly what he stands for in his candidacy for U.S. Senator from Colorado. Unlike incumbent Cory Gardner, who betrayed his policy pledges to constituents, instead becoming a Donald Trump yes-man, Governor Hickenlooper clearly lays out detailed positions on major policies critical to Colorado. This factsheet highlights some key policy areas.

Climate Change and the Environment

While Governor in 2017, John responded to Trump’s pulling our country out of the Paris Climate Accord by joining Colorado to other states in the U.S. Climate Alliance. Also, at that time, he issued an executive order setting goals for Colorado to reduce greenhouse gas emissions by 26% from 2005 levels by 2025.

Now, John is further pledging that as Senator he would have the power to push for the U.S. to rejoin the Paris Climate Accord and to work toward a 100% renewable energy economy by 2050, with a 43% reduction in 2005 greenhouse gas levels by 2030.

(In contrast, his opponent, Cory Gardner, aligns himself strictly with Trump’s positions and so addressing climate change and the horrific impacts on our environment are not on Gardner’s radar.)

John believes that our health care is a right, not a privilege. As Governor, John showed sincere concern for our health care. He established Colorado’s Connect for Health exchange to help 500,000 Coloradans obtain coverage under the Affordable Care Act, and he expanded Medicaid to cover 400,000 additional Coloradans. As Senator, he would work to add a Public Option to the ACA and help us work toward universal health coverage in the U.S. This of course keeps protections for pre-existing conditions, and all the benefits we have gained from the ACA.

(In contrast, Republicans, including Gardner have voted against the ACA numerous times (at least 9 votes by Gardner to repeal our coverage), and now he and his party of Trump support a Supreme Court case that would end the ACA -- ending healthcare coverage for millions of Americans, and endangering pre-existing conditions for many millions more. These positions by Gardner and the Republicans are especially cruel with the devastation caused by COVID-19 and its still unknown long-term impacts.)

Following along with protecting health care, John is focused on taking steps to protect Social Security and Medicare.

These are popular Democratic programs from the 1930’s and 1960’s, respectively, that have lifted many seniors out of poverty and allow a dignified and stable retirement for persons who have worked and contributed to our country for many years.

As Senator, John would work toward lowering prescription drug costs and improving other senior programs.

(In contrast, Cory Gardner stands alongside Trump who has pledged to cut social safety net programs immediately in 2021, including Social Security and Medicare. They are already taking steps to end support for pre-existing conditions in health care.)

Colorado is home to six military installations, including NORAD. As Governor, John oversaw deployments of our state’s national guard, and felt a close relationship and commitment to the military, the veterans, and to the national security of our country.

As Senator, he would work toward re-establishing close relationships with our allies and renew respect for our intelligence community. John also supports improvements in funding for veterans’ programs, including assistance with transitions back to civilian life and veterans’ health care issues.

(In contrast, it is clear that President Trump demonstrates little respect for our military and our veterans (considering them “losers and suckers”), and he has lost the respect of our previous global allies. Unfortunately, the Republicans, including Cory Gardner have not stood up against Trump's attacks on our intelligence community nor for our veterans.)

John understands that our economy has suffered enormously under the strains of the pandemic. Businesses have shut down -- some may never reopen. Many millions have lost their jobs, and families are struggling to afford their housing, food and healthcare.

John believes that we must follow the science to help our people overcome this pandemic, while helping our people weather these health and economic crises. The pandemic has pointed out serious structural inequalities in our system that we must resolve to re-build a resilient economy for all of us.

During his tenure as Governor, John helped elevate the Colorado economy from 40th to first in the country, and those skills will be needed in the Senate to heal our country and get our economy back on track.

(In contrast, Cory Gardner stood by Trump every step of the way in denying the science and downplaying the threat and depth of the pandemic. Their actions contributed to the extreme failure to respond adequately to protect our people and our economy.)

The above are just a few examples of the fifteen detailed positions John thoughtfully addresses on his website. Other important topics to check out include:

A Message From John to Colorado Voters

"When I get to the Senate, one of my first priorities will be working to pass the For The People Act, the most sweeping campaign finance, voting rights, and ethics reforms since Watergate.

"The For the People Act (H.R.1, S.949) proposes to reform money in politics by bolstering public financing and donor disclosure provisions.

"It strengthens our elections by addressing regulatory barriers to voting and creating a system of automatic voter registration.

"And it bolsters accountability by closing lobbying loopholes and requiring greater transparency from government officials.

"This bill was passed in the House with unanimous Democratic support and has been cosponsored in the Senate by every Democratic Senator, but has been blocked by Mitch McConnell and Cory Gardner for over a year.

"I support swift action on the For the People Act to curb the influence of special interests in our government and make it easier for all eligible voters to have a say in our democracy."